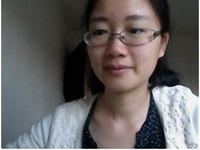 Shijia Nie is a Ph. D. candidate in premodern Chinese literature. She received her B.A. (2008) in Chinese Language and Literature from Beijing Normal University and M.A. (2011) in premodern Chinese literature from the Graduate School of Chinese Academy of Social Sciences. Her research interests focus on the poetic transition from Tang to Song of China, especially the aspect concerning gender representations in the poems of the literati's innovative interaction with the romantic culture in the Mid-to-Late Tang. She is finishing her dissertation on the study of the Late Tang poet Li Shangyin's romantic poems that have had extraordinary influence on the romantic character of Chinese poetry for over a thousand years, even though her project focuses at the most important Tang-Song transitional period. She is also interested in gender representations and material culture in the poetry of late imperial China.

In her leisure time, she likes to play the violin, travel, listen to music, and watch movies.