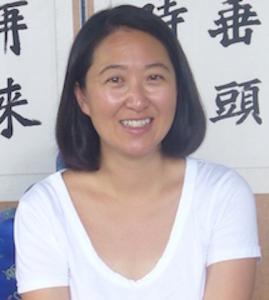 Jina Eleanor Kim is an assistant professor of Korean literature and culture in the Department of East Asian Languages and Literatures. She is the author of Urban Modernities in Colonial Korea and Taiwan, a comparative study of modernist literature and culture emerging in Seoul and Taipei during the Japanese colonial era; co-editor of The Journal of Korean Studies special issue on “Intermedial Aesthetics: Korean Literature, Culture, and Film,” a collection of essays that show how the movements across media can open up new ways of engaging in transnational, interdisciplinary work on Korea. She is currently completing a second book project on Sonic Narratives and Auditory Texts in Modern Korea, which examines the relationship between emerging genres and new media technologies especially through the study of radio dramas and sound studies. Her future research project is on contemporary global Korean literature and hemispheric studies which probes the literary and cultural productions between Korea and global Korean diasporic cultures as well as the cultural production of ethnic Korean returnees to their “motherland.”

Broadly, her research interest area is in modern Korean literature and cultural history. More specifically, her research questions rest in the historical, theoretical, and philosophical concept of the “New,” whether they be material goods, social and technological revolutions, cultural and artistic movements, racial formations, or subjects of knowledge. Her other research areas include comparative colonialisms, in particular, between Korea and Taiwan, Vietnam, and Korean diasporic literatures; Intermediality, transmedia storytelling, and digital humanities; Sound studies; Popular fiction and popular culture; and History of technology and literature.

Professor Kim offers courses that combine a focus on Korean literature and culture with an engagement of key problems in contemporary issues and comparative methodologies, such as diaspora and space; empire and imperialism; new media and technology; race and racism; and gender and modernity. All courses engage substantially with theories of modernism, transnationalism, and postcolonialism and are committed to diversity through pedagogy and content.

EALL 410/510: The Making of National and World Literatures: Power, Prestige, and Literary Prizes